As the German economy gears up to adopt cannabis, so, too, are the country’s small businesses and startups. With positive political attention, high demand for recreational cannabis and a booming startup scene, Berlin looks likely to profit the most. It is for this reason that the German entrepreneur Finn Age Hänsel is calling the city home for his latest enterprise, Sanity Group.

Getting good bud in Berlin

A quick Google search for ‘how to find cannabis in Berlin’ turns up a range of responses.

The sites hosting these conversations are usually the same. Reddit connects locals with incoming tourists either with a few locations for pick up (Hasenheide and Görlitzer Park) or specific contact information. Some users even offer scripts in German that non-native speakers can follow to ensure a smooth transaction.

Other sites like We Be High or All About Berlin offer readers a brief guide to the legality and details of picking up a bag of cannabis in Germany. They write about prices, typical strains on offer and best practice for not attracting attention. It is at this final point, however, that many readers become confused.

With all of these resources, maps and friendly online chatter, it would be easy to think that Berlin has legalised the plant. And one would only be half wrong.

Authorities had placed a zero-tolerance ban on all drugs in the park in 2015 but eventually retracted the move two years later. Dirk Behrendt, a politician representing the left-leaning Greens Party, said that the ban ‘was counterproductive and unnecessarily burdening the judiciary.’

It was also costly for the police to uphold, with some reports saying it cost the police €40 for every gram of cannabis confiscated.

The move naturally attracted ire from others who claimed that the city was ‘surrendering itself to the drug dealers’, according to a spokesperson of the Free Democratic Party (FDU).

Thus, instead of a blanket ban, the park joined the rest of the city in terms of how it deals with cannabis. The plant is formally considered a class III drug, a relatively mild classification, in all of Germany. Class I drugs include LSD and Heroin, while class II drugs refer to narcotics like cocaine.

The city of Berlin interprets this classification slightly differently than the rest of the country, however. In Bavaria, a traditionally conservative part of the country, residents are allowed up to six grams of cannabis. In Berlin, this figure is more than double, at 15 grams. 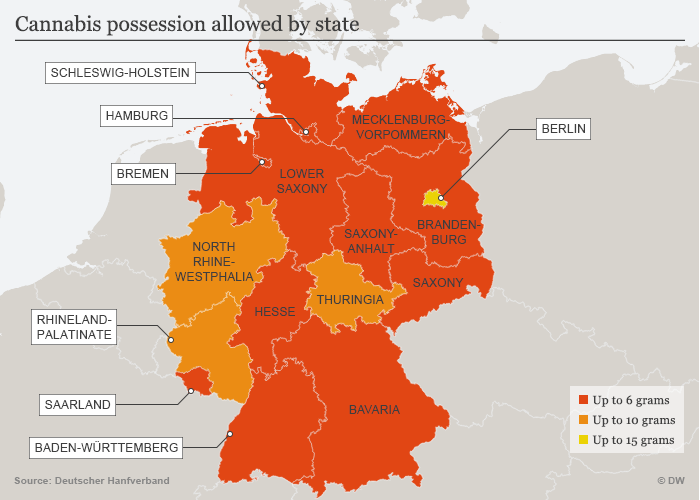 It should be clear that these figures refer exclusively to personal consumption. The laws are harsh for those who attempt to sell or cultivate the plant. Moreover, these are not hard and fast limits. The Supreme Court capped personal holdings at 7.5 grams of tetrahydrocannabinol (THC), but each region can interpret the recommendation as it wishes.

So, cannabis is still illegal, but authorities will react according to the severity of the case and the intentions of individuals who break this law. This means that arrests are few and far between, unless the culprit is carrying far more than the suggested limit or is also holding other drugs.

Lately, law enforcement is primarily focused on the steady rise of high-quality cocaine in the city. Der Spiegel, another German publication, wrote that:

‘Never before has there been so much cocaine on the market in Germany, in Europe or around the world, investigators say. And the stuff that is available has never been purer. Some estimates put the average level of purity at 70 percent or higher.’

As police focus resources on other, more dangerous sectors, Germany is seeing a growing trend of cannabis users. This trend then, in turn, affects politicians, and soon cultural tendencies become law. In 2017, for example, the whole of Germany, not just Berlin, legalised medical cannabis. Demand has also skyrocketed in the two years since passing the law.

To help fulfil these needs, the country put 13 lots of land up for bid to grow medical cannabis. Aphria and Aurora each won five, while a local outfit Demecan won the final three. The small Berlin-based cannabis growers were a surprise to many. One of the stipulations for winning a lot held that companies needed rich experience in cultivation.

So, how did a company with a little more than two years in operation earn three lots? The answer is simple: Germany wants in on the cannabis game.

Opening the doors to cannabis in Germany

Before becoming the CEO of Movinga, an online moving company in Germany, Finn Age Hänsel helped found the Australian equivalent of Zalando, The Iconic.

The Iconic became a multi-million dollar success in the span of two years, with hundreds of employees. In an interview with Strain Insider, Hänsel explained that, though he was grateful for the experience, he wanted to return to Europe and focus on the burgeoning tech industry.

While still helping run Movinga in 2017, he began to see the swift change in German legislation on cannabis. ‘This was a major spark for me to make a transition’, said Hänsel.

In 2002, cannabis was incredibly low on the list of things that the German government was doing. When asked about the subject, parties like the leading Christian Democratic Union (CDU) were often quick to shutter the conversation. As a member of the CDU, Hänsel said that he ‘always felt like they were the odd one out.’ He then went on and added, ‘the way we treat cannabis isn’t correct.’

The trope is the same all over Europe. Patients seeking unique medical attention for a swath of nervous system and muscular maladies have historically been forced to go to the black market. As a result, it’s not uncommon for terminal cancer patients to be put in prison for cultivating plants for personal use. The legalisation of medical cannabis in Germany helps relieve this issue.

The issue is far from concluded, however. Making improvements to the current system has also inspired entrepreneurs like Hänsel to begin populating a new market.

‘Medical cannabis is perhaps the clearest business opportunity, Prescription numbers are doubling, and the state is facing a major shortage of supply.’

Sanity Group also bagged all the necessary import licenses so that it can process cannabis from medical suppliers like Bedrocan. Hänsel plans on officially launching a CBD brand called Vaay next month too. To celebrate, he explained that Vaay would tap the resources of one of Hänsel’s other businesses, Berliner Berg, to make a CBD beer.

The suite of companies, products and regulatory compliance has culminated in financial backing from the likes of Casa Verde, an American cannabis fund, Holtzbrinck Ventures and Food-VC Atlantic Food Labs. Hänsel mentioned that Sanity Group is also able to invest in similar companies in the space.

When asked if it would ever pursue cultivation, Hänsel said it would likely never take this route. The costs of indoor grows in Germany are, first of all, too high. Secondly, he is currently applying a critical lesson he learned from the tech space — specialisation. ‘We want to focus on where value is being created. Not only is that not in cultivation but our team is much better at things like research, branding and a strong go-to-market strategy’, he said.

Related: How Far is Germany from Legalising Marijuana?

Indeed, the future looks bright for Sanity Group, but much of this optimism comes from changes in the country’s stance on cannabis. The rest of Europe, from France to North Macedonia, also looks eager to incorporate some facet of cannabis into its economy. For Hänsel and Sanity Group, Berlin looks to be a leader of this race in 2020.

The post The German Startup Scene is Making Room for Cannabis appeared first on Strain Insider.

Fitness and Hemp — Can CBD Really Up Your Gains?